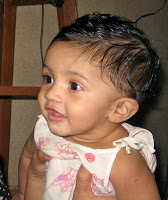 Joshua is my small little nephew who was born on 23rd May 2009. He is a cute little bundle of mischief who is so full of energy that he keeps his parents on their toes all the while. The little rest they get is when he is taking a nap in the daytime and when he sleeps at night. I have taken care of him the few times I have visited their home because they do not live close by and time does not permit me to visit them often , though I speak to them often on the phone. Even when I am talking to his mother he wants to say "Ello" to me when his mother tells him that it is "Aunt Sheila"  she is speaking to. He loves to play with all the pots and pans instead of the lovely toys he has.
I last saw him on 11th June 2010 which happened to be my brothers birthday. I hope and pray that he grows to be a good child to his parents.
Love to all,
Sheila